SpeedFan is a very important function of the Microsoft Windows Operating System. Though it is an important part, you might not have heard much about it. So, how to use SpeedFan if you’ve heard so little about it?

If you’re interested in SpeedFan, how they work, how you’re going to use it, then this article is just for you. In this article, I’m going to explain everything you need to know about using SpeedFan.

Instructions on How to Use SpeedFan 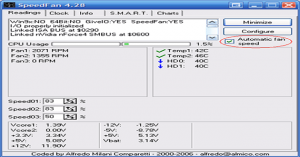 You might feel that using SpeedFan is complicated work. Though it is, to some extent. But I’ll explain all the steps simply and thoroughly so that you won’t feel it be much complicated.

Controlling and regulating the fans through SpeedFan is a bit complicated. Because you might face some side effects. As a result, your PC might lag while using the SpeedFan. For this reason, before starting the process, debug all the electric-controlled fans.

The SpeedFan software is not in-built. You have to install it from the internet. For that, search for SpeedFan on google. You’ll get several links to download SpeedFan from. Choose any one you like. And then install it on your computer operating system.

By the way, if you’re feeling too lazy to search around google, then follow this link here. This link will redirect you to a website where you can generate a download link for SpeedFan easily.

Please note that the bottom left portion of the window shows the speed of each fan and the right side shows the corresponding temperature values. The closer the temperature is to the room temperature, the better. But you should be concerned if the temperature rises above 85 degrees Celsius.

There is a box between ‘GPU Fan’ and ‘%’. Select 100% in that box. After that, press the ‘configure’ button from the upper right portion.

The ‘configure’ dialogue box should pop up and search for ‘Delta value for fan speeds’. This part is important for ensuring the maximum speed of the fans. Select it to be 100%.

Furthermore, go to the ‘Advanced’ tab from the top menu bar. You’ll find a drop-down menu bar beside ‘Chip’.

Here, select the superiOR chip according to your computer configuration. However, keep in mind that, PWM chips can control the manual PWM chip better.

Selecting the Speed of the Fans

By using this software, you can adjust the fan speed with the arrow keys from the ‘fan control’ window. You can select it to any percentage up to 100%. But be careful about one thing. Don’t keep the fan speed below 30%. This is dangerous because keeping the fan profile so low might make your fan often stop working.

In this window, you can select the range of your fan speed depending on the temperature. Choose anyone you think is right.

Again, from the ‘Speeds’ section, select the maximum and minimum value of the fan speed and then search for the checkbox named ‘Automatically Variated’. Enable the checkbox.

These are the primary steps of using the SpeedFan application software.

There is an additional tip I can give you after all these steps. If you want to monitor your fan’s progress as soon as you turn on the computer, you can add it to the ‘quick access toolbar’, the extreme right portion of the taskbar. There, it will always be in front of you and you can check the progress of your fans whenever you want.

Finally, let me tell you one more thing. Sometimes you might not find the accurate chip selection for your computer. For example, if you’re using a laptop, the chip options will be different. In that case, don’t panic. Search google for the appropriate chip for your computer model and then select it accordingly.

Basic Concept on SpeedFan Along with Uses

Before you know how you can use the SpeedFan, let me explain everything in brief about what SpeedFan is and for which purpose you use SpeedFan.

SpeedFan is basically the regulator for the fans inside the CPU. There are two to eight fans inside the CPU depending on the configuration of that PC. The fans control the temperature of the components inside the PC. By using SpeedFan software, you can increase or decrease the speed of the fans.

The temperature of the inside components of a PC is always high. It is mainly because the circuits are constantly passing electricity and actively doing all kinds of jobs. To keep the computer from overheating, there are fans place to ensure proper ventilation. When you use SpeedFan software, you can regulate the speed of the fans and thus, the PC is saved from overheating.

Now comes the main question of this topic. How to use a SpeedFan? I’ll show you some simplified steps to regulate the fans by using the SpeedFan application. Keep reading this article till the last to learn more.

The SpeedFan application Software is a very effective tool if you know how to use it properly. Of course, there is more to this software, than what I’ve shown you. But the steps I’ve mentioned wrap up the whole concept of how to use SpeedFan software.

There are options for further refining your way around the software. If you want to do that, you just have to tinker around with the software to be more accurate about how things work on this software.

I think, now you have a clear idea of how to use SpeedFan in detail. I’ve not only given you the step-by-step guideline, but also a brief explanation of how everything works on SpeedFan. Thank you for reading until the last. Until next time buddy!