Graphics card plays a big role if you want the smoothest experiment while using your computer. Overlocking your Rx580 is the best decision to make for enhancing overall facilities. Sadly, there are instructions on how To Overclock Rx 580 that are quite difficult to follow.

We have figured out the easiest and straightforward way to overlook Rx580. If you want to perform the task, read the full article carefully and you’ll be successful in it. 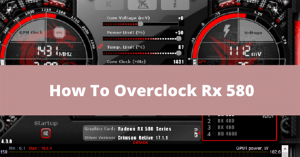 Are you concerned about going through the hassle of overclocking a GPU? Well, good for you, overclocking AMD’s RX580 is as easy as child’s play with the proper steps. Let’s break the steps down nice and easy.

Go to The Radeon Configuration

Most often after a proper installation of the GPU to your system and booting it up, drivers come in along with them. However, there are a few software you need to get installed from the get-go to keep the GPU running.

Different GPUs have different software to monitor and manipulate them, for RX580, we have the AMD configuration software. Once installed, you can either open the software or simply just right-click on your desktop and select AMD Radeon configuration to open it up.

After the software opens up, you’ll be able to see various things related to your GPU i.e the GPU clocks, frequencies, temperatures, etc along with different tabs like Video, Gaming, Monitoring, etc. You should be able to open the gaming features of the software just by clicking on the gaming tab. Once in the gaming tab, have a look at the upper left side, simply click on global settings.

Once you’re in the global settings, you’ll be prompted with a couple of options; one of them being the global Wattman. Next up, simply click on it to enter the overclock feature. Here, you’ll be able to monitor the memory clock, GPU clock, fans rotations per minute, power consumption, etc of the GPU. You can maximize any of these clocks manually to set the GPU on an overclock.

Understanding the Clocks of the GPU

Next up, let’s have a look at the different clock options and settings of the GPU and what they really mean. Some people think that it’s a good idea to keep the GPU running on an overclock at its maximum capability at all times. But that idea appears to be very wrong.

While overclocking your GPU, you need to monitor how your system and the temperature keep up with the memory clock, which is why you need to increase the clock in a little bit slower approach. Boosting the memory clock out of its limit where it’s not able to cope with the power consumption might cause it to overheat.

You need to make sure and monitor that the temperature isn’t exceeding its limits while overclocking.

A temperature read of 80 to 90 degrees is considered normal for a regular GPU these days provided that there aren’t any external coolers hooked up with the system. Once it exceeds 80-90 degrees, you should know that your unit is close to its limit.

Overheating potentially decreases the longevity of a unit as well as manipulating its performance. That’s why, in order to get the most out of your unit, you must monitor your clock speeds and power consumption periodically.

Before you overclock the GPU though, you must make sure that the GPU cooler that is built-in with the unit, is functioning properly. Overclocking might potentially cause overheating, to prevent which, coolers are provided built-in.

What Actually is AMD Radeon RX580?

To get the most out of your PC, a graphics card is one of the most important units. From playing games on a high resolution and specs to working on a 4k rendering, video editing, or other graphical unit works, graphics cards are a get to go. Since Nvidia and AMD are battling over the current market of Graphics Processing Units, we’re getting introduced to new generations and variations of graphics units every now and then.

The infamous Radeon RX 580 from AMD is a performance-based beast, sent forth in April 2017. Even though it’s a monster when it comes to cranking the clocks of a unit, it’s still within a great value price range. Built on the 14 nm processor, the AMD Radeon RX580 is one of the favorite flagships.

Established on the Polaris 20 graphics processor, Radeon RX 580 supports up to DirectX 12, provided that you’re using the XTX version of the unit. With DirectX 12 being the latest of its kind, you’ll be able to run most of the modern games if not all of them, using this GPU along with your system.

Not to mention, other software which comprehends a whole lot of graphics processing, for instance, working with multimedia editors, 3D modeling in Adobe’s Auto Desk, etc become a whole lot more feasible with this GPU.

How Useful is AMD Radeon RX580?

Let’s have a closer look at the build factors, features, and essentials of this GPU to have a clear perspective on why this GPU is a game-changer.

This absolute beast of a GPU comes with 2304 shading units built-in along with 144 units to map textures along with 32 different ROPs. The Polaris 20 graphics processor used in the Radeon RX580 is a moderate-sized modern-day chip, with an area of 232 mm², which contains 5,700 million transistors just for one GPU.

There are two different memory variants of this GPU, one being the 4GB variant and the other, an 8 GB one. The 8GB variant of the GPU uses a 256-bit memory interface to connect between units. The GPU base clock runs at a frequency of 1257 MHz. By overclocking, which can be boosted up to 1340 MHz to get the most out of this unit.

For the 8GB variant, the memory clock runs at a frequency of 2000 MHz. RX 580 is a dual-slot card. The unit draws its consumption of power from a 1x 8-pin power connector. The power consumption of this GPU is rated at 185 W maximum. This essentially means power consumption with this unit is not going to be a hassle for the user.

Worried about multiple displays? Well, good for you because the display outputs include 1x HDMI and 3x DisplayPort. This means you can easily hook up the system with a multiple monitor setup without having to drop a sweat.

Are you unsure about the cooling systems and overheating issues with most GPUs? Fear not, because the Radeon RX 580 is using a PCI-Express 3.0 x16 interface, which is not only essential for the next generation graphics processing but also conserves power consumption. The card is 241 mm, features a decent cooling system, dual-slot.

Why Overclock a GPU?

Are you using an rx580 graphics card but not getting the most out of it when you need high graphics performance? No worries, you can easily overclock the unit with few extra steps. Let’s go through the process of how to overclock rx580 and increase the speed with a lower voltage limit.

In order to maintain a high graphics performance coming out of your system, let the reason be for heavy gaming or even using high definition rendering, you need processors of decently fast frequency rates per cycle. But there comes an issue on every device ever, it gets fore-ran by the next generations. Worry not, RX580 has your back with its own overclock feature. In cases of immersive usage of a GPU, overclocking has to be the best solution.

While the article mentions a practical overclocking guide, it unleashes the true performance of the GPU overall. Ultimately, overclocking is what you need to unchain the GPU, in order to ensure the best performance out of your system for a purpose. So, ladies and gentlemen, this article answered the question of how to Overclock Rx 580.